Fischer’s Auction is no clash of bidders, no hammering, pressing and pushing to the highest price possible. Led by a notary, it is an honest and controlled procedure, a smooth extension of the discretion and alleged courtesy of the art dealer. Most importantly, Vickrey is no theatre that exploits the greed and grudge of human nature. In our auction, a curated collection complements Fischer’s House, the national monument of Ede, where the notary dynasty Fischer once lived and worked.

Fischer’s Auction is an application of the Vickrey auction, a new mechanism in the art market. As scientifically described by Nobel prize winner William Vickrey (1914-1996), the highest bidder buys the lot for the second-highest bid.

In theory
Suppose that you see an artwork in this catalogue that you are interested in to buy. In that case, it is important to understand how to bid, as Vickrey himself recommended. The essence of his ‘rational bidding strategy’ is that the bidder is best off by bidding his own maximum willingness-to-pay. However, it may be difficult to determine this. A thought experiment may help: think about the ultimate price for which you would still be happy to buy the artwork. Suppose now that someone else walks away with it for one-hundred euros more. Would you have wanted it for that price too? If so, your valuation lies higher. Repeat this until you have found the amount you want to bid, for which you are indifferent whether you are buyer or not.

In practice
The auction is publicly accessible in Fischer’s House. On this day it is possible to view the art and place a bid. The notary starts the auction at 2 pm. He asks per lot whether anyone takes the last opportunity to hand in his envelope. As soon as he has gathered all bids, the gavel falls: only then does he name the hammer price (second-highest bid) and continues with the next lot.

As for price, the Vickrey and English auction will be similar. They predominantly differ in terms of psychology. The theatrical English auction exploits the so-called auction fever, possibly leading to a marginally higher price. As a result, this leads the price to be more whimsical. The Vickrey auction, however, is a smooth extension of the art dealer’s strategy. It is a civilized and controlled method that allows participants to deliberately bid in discretion. Along with the right to exchange a purchase in Simonis & Buunk’s collection, a bonus for the second-highest bidder and a guarantee of authenticity, this makes Fischer’s Auction a unique phenomenon in the global art market.

Feel free to ask me any questions you may have about the auction or artworks. Hope to see you at the viewing days in Fischer’s House! 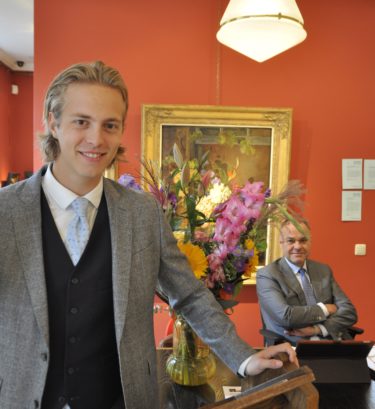